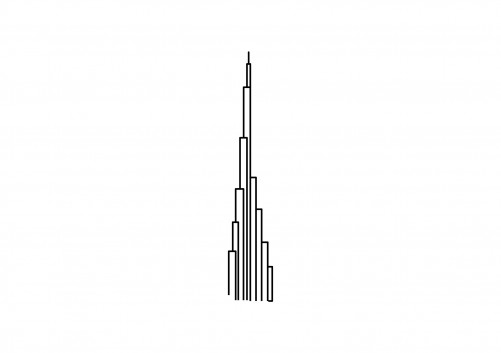 The Burj Khalifa (/ˈbɜːrdʒ kəˈliːfə/; Arabic: برج خليفة, Arabic pronunciation: [bʊrd͡ʒ xaˈliːfa], Khalifa Tower), known as the Burj Dubai prior to its inauguration in 2010, is a skyscraper in Dubai, United Arab Emirates. With a total height of 829.8 m (2,722 ft) (just over half a mile) and a roof height (excluding antenna, but including a 244 m spire) of 828 m (2,717 ft), the Burj Khalifa has been the tallest structure and building in the world since its topping out in 2009, supplanting Taipei 101, the previous holder of that status. Construction of the Burj Khalifa began in 2004, with the exterior completed five years later in 2009. The primary structure is reinforced concrete and some of the structural steel for the building originated from the Palace of the Republic in East Berlin, the former East German parliament. The building was opened in 2010 as part of a new development called Downtown Dubai. It was designed to be the centrepiece of large-scale, mixed-use development. The decision to construct the building was based on the government's decision to diversify from an oil-based economy, and for Dubai to gain international recognition. The building is named in honour of the ruler of Abu Dhabi and president of the United Arab Emirates, Khalifa bin Zayed Al Nahyan; Abu Dhabi and the UAE government lent Dubai money to pay its debts. The building broke numerous height records, including its designation as the tallest building in the world.