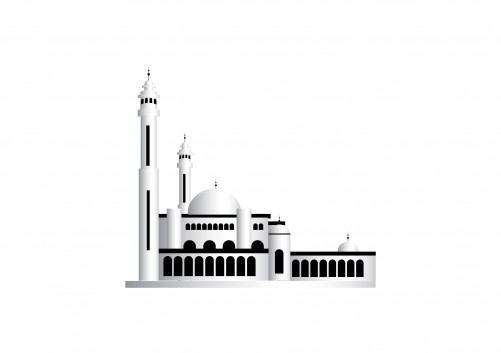 A mosque (/mɒsk/; from Arabic: مَسْجِد, romanized: masjid, pronounced [mǝsdʒid]; literally "place of ritual prostration"), also called masjid, is a place of worship for Muslims. Any act of worship that follows the Islamic rules of prayer can be said to create a mosque, whether or not it takes place in a special building. Informal and open-air places of worship are called musalla, while mosques used for communal prayer on Friday are known as jāmiʿ. Mosque buildings typically contain an ornamental niche (mihrab) set into the wall that indicates the direction of Mecca (qiblah), ablution facilities and minarets from which calls to prayer are issued. The pulpit (minbar), from which the Friday (jumu'ah) sermon (khutba) is delivered, was in earlier times characteristic of the central city mosque, but has since become common in smaller mosques. Mosques typically have segregated spaces for men and women. This basic pattern of organization has assumed different forms depending on the region, period and denomination. Mosques commonly serve as locations for prayer, Ramadan vigils, funeral services, marriage and business agreements, alms collection and distribution, as well as homeless shelters. Historically, mosques have served as a community center, a court of law, and a religious school. In modern times, they have also preserved their role as places of religious instruction and debate. Special importance is accorded to the Great Mosque of Mecca (centre of the hajj), the Prophet's Mosque in Medina (burial place of Muhammad) and Al-Aqsa Mosque in Jerusalem (believed to be the site of Muhammad's ascent to heaven).