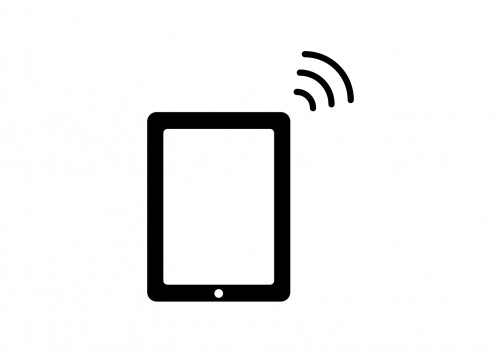 A tablet computer, commonly shortened to tablet, is a mobile device, typically with a mobile operating system and touchscreen display processing circuitry, and a rechargeable battery in a single, thin and flat package. Tablets, being computers, do what other personal computers do, but lack some input/output (I/O) abilities that others have. Modern tablets largely resemble modern smartphones, the only differences being that tablets are relatively larger than smartphones, with screens 7 inches (18 cm) or larger, measured diagonally, and may not support access to a cellular network. The touchscreen display is operated by gestures executed by finger or digital pen (stylus), instead of the mouse, touchpad, and keyboard of larger computers. Portable computers can be classified according to the presence and appearance of physical keyboards. Two species of tablet, the slate and booklet, do not have physical keyboards and usually accept text and other input by use of a virtual keyboard shown on their touchscreen displays. To compensate for their lack of a physical keyboard, most tablets can connect to independent physical keyboards by Bluetooth or USB; 2-in-1 PCs have keyboards, distinct from tablets.